BENJAMIN LICHTMAN concentrates his legal practice on personal injury matters, recovering compensation for the seriously injured and victims of wrongful deaths. For nearly a decade, he has aggressively litigated a wide range of personal injury claims, including wrongful deaths, automobile & truck accidents, slip & falls, assaults, and medical malpractice cases. A passionate advocate for those he represents, Attorney Lichtman has an impressive track record of negotiating substantial settlements for his clients and was recently inducted into the Multi-Million Dollar Advocates Forum (one of the most prestigious groups of trial lawyers in the United States).

In addition to personal injury cases, Mr. Lichtman has fought for victims of defamation, police brutality, and other civil rights violations. He received national media attention for his representation of college football athlete Austin Scott in a federal lawsuit, and has represented victims of police brutality in Allentown, Bethlehem, and Easton, Pennsylvania.

Benjamin graduated from The Pennsylvania State University with a degree in Psychology then earned his Juris Doctor from Penn State’s Dickinson School of Law, where he took a focus on civil litigation and courtroom advocacy. He represents clients in both State and Federal Courts, and is licensed to practice before all Pennsylvania trial and appellate courts; the United States District Courts for the Eastern and Middle Districts of Pennsylvania; and the 3rd Circuit Court of Appeals.

Born and raised in Allentown, Ben has a special connection to the Lehigh Valley. He maintains a close relationship with his alma mater, and serves on Penn State Lehigh Valley’s Psychology Advisory Council.

Attorney Monahan is licensed to practice in all of Pennsylvania’s sixty-seven counties, and has successfully litigated numerous cases in the U.S. Federal Courts, as well.Colin devotes much of his time to representing those injured due to the negligence of others in automobile accidents and other personal injury matters, and has gained the attention of news outlets for his work representing victims of police and institutional (prison) brutality. He also defends clients accused with a broad range of crimes, especially alleged driving under the influence (DUI) charges, drug offenses, and probation/parole violations.

Colin graduated with a degree in Political Science from Lock Haven University and received his Juris Doctor from Widener University School of Law, located in Harrisburg, Pennsylvania.

When he’s not in Court, Colin can be found fly-fishing along his favorite trout stream or on the nearest basketball court. An avid outdoorsman and sports fan, he spends much of his free time enjoying the wilderness of Pennsylvania with his wife, their newborn son, and their two dogs. 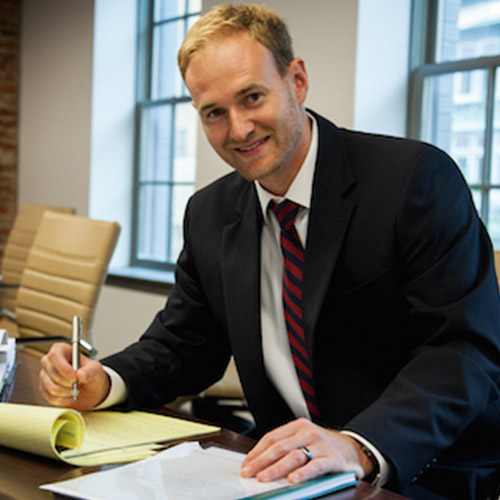